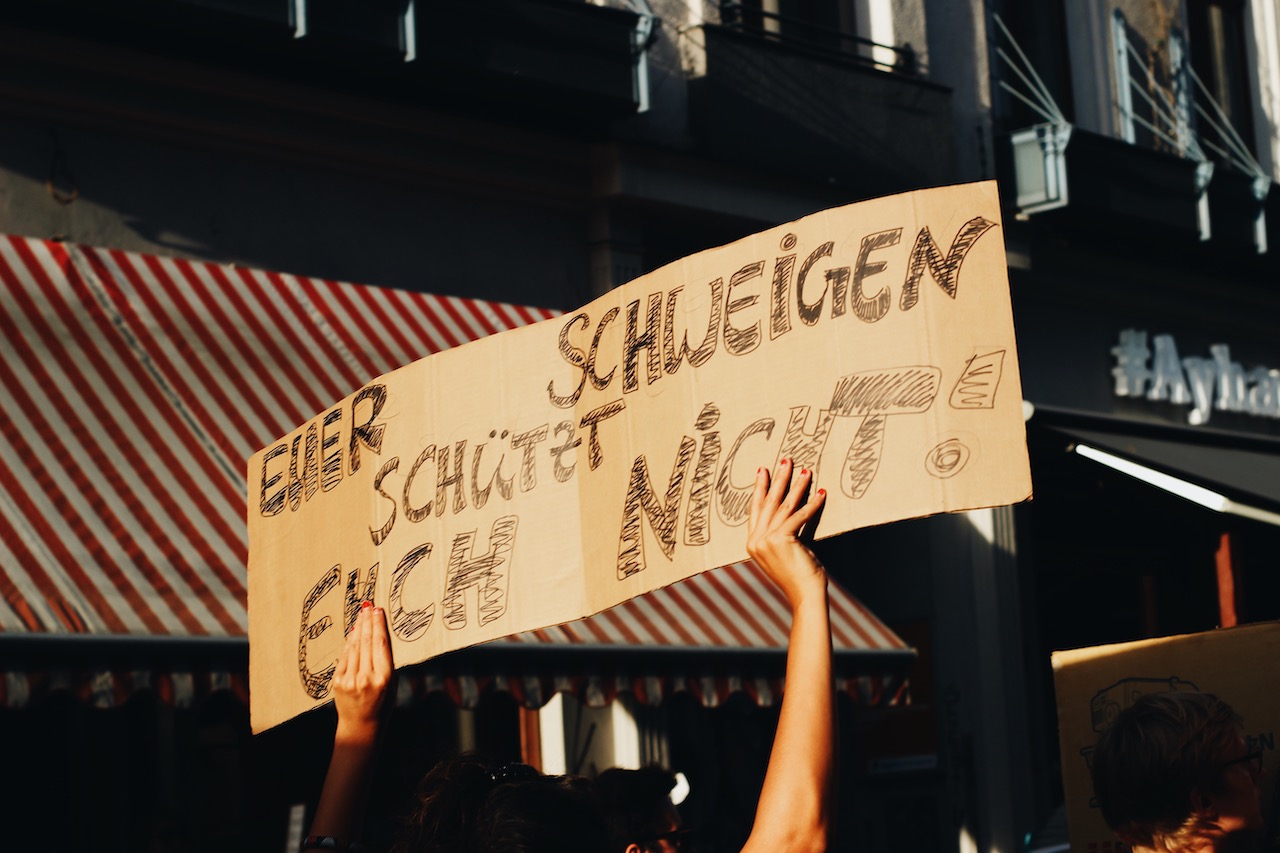 It is going to be published on Saturday, November 3rd. I didn’t see anything of it yet. But since I know that there are some people who think that Black Lives Matter Berlin is part of a big organization and somewhat franchised or exported from the United States – or that other people might have a different impression of what is actually going on but questioning our activities too – I’d like to serve some realness right now.

Please notice that this is just my personal perspective on things and that I write this after a long day of learning how to code. Also, I am writing in English because this is the language I feel most comfortable with when I need to articulate myself, speaking on issues that are very much emotionally draining and hit close to home. My first language is German though… might translate this when I find sometime later…​​

Six womxn founded Black Lives Matter Berlin (BLMB) for you, for us, Black people in Berlin, Germany – to make ourselves visible, to connect our various communities, and form a strong group within society to make a change. What a powerful idea right? As a matter of fact, 4 of 6 co-organizers left the team after our protest in 2017 to focus on their own lives again.

It would have been easy to channel the energy that we created at the time and involve people we reached with #BLMMonth2017 to become part of the movement. But right at the point when this could have happened the „feminist women*s collective“ fell apart.

I remember M. and I sitting in her kitchen shaking our heads. Now I was the only Black person in our Black Lives Matter Berlin Chapter…

When you realize your project is a lot bigger than you, that’s a beautiful place to be. But when you realize that the so-called „community“ you thought of as a foundation is gone as soon as the party is over – that is a very painful and lonely place to be.

In July 2017 my Grandma died. I had to quit my job in August because I was not able to bare the emotional/mental stress of working 40 hours a week – on top of my grief – at a company where I was not just the only Black person on the team but the only person of color in an all-white, all-cis, 100%heteronormative™ company. On top of that, the AfD was elected as 3rd biggest political party in German parliament and CNN published a video that made it very clear that Black people are still tortured, raped and sold into slavery in Libya. Of course, none of my fellow coworkers gave a shit about that.

Afraid of drowning in my sadness I focused on BLMB more than ever. This work was unpaid and overwhelming but It made me feel like I wasn’t as powerless in the midst of it all. Coping mechanism #1: trying to keep me busy.

Eventually, D. became a new member and J. came back to the team. So we had more regular meetings again and we were able to (re)act again.

In December it was actually my goal to join forces with other self-organized groups of the Black community to build an alliance against the devastating situation of refugees in Libya and racist European migration laws. But none of them replied to my call for action. Berlin Winter + Two weeks before Christmas = Bad Timing

When M., J. and I tried to organize at least a standing protest and some live music by ourselves, some activists and supporters of Gerhard-Hauptmann-Schule in Kreuzberg reached out to us. We managed to organize a small protest against the eviction of the school in January 2018 and tried to recruit more people to become part of BLMB by announcing a public meeting around the same time. A small number of people came to march with us and in fact, only 8 people attended our meeting the other day. Nobody committed themselves to the chapter though.

One week before that I had a mental breakdown. To be honest I don’t know why I didn’t stop right there. I guess the reason was that at the time my activism was everything I had and I was afraid to give up. There was no alternative but facing my grief and disappointment.

I had almost lost everything in 2017 – not only one of my mothers but my best friend, my longtime romantic partner, and my source of income too. If I would have given up on BLMB as well, there would have been nothing left that mattered to me. By the time I quit, I was already depressed and suicidal.

But I was not the only one in the team who was struggling to stay alive. While the AfD was voted into German parliament as the 3rd biggest (racist fascist neo-liberal) party in power we all had to fight and we did lose many battles in our personal lives too. There was death, there was illness, there were breake ups… everyone was just exhausted.

I remember talking to M. on the phone for hours… I remember tears, lots of tears. But in her words „Giving up is not an option.“ It wasn’t, not at that time.

Later in 2018 when A. and L. joint the team we did add up to six members again. Without them and the support of everyone who volunteered, this year’s protest would not have been possible.

Still, I have to admit, in 2018, BLMB consumed all my energy with almost no return.

Retrospectively I think, with a small team of six people, minimal resources, and no funds we are not able to help anyone, not even ourselves.

We have a secure platform on Mattermost that works like a social network and is ready to be used to organize and communicate.

We have articulated community guidelines to make sure we are on the same page with everyone who wants to get involved and become an active part of the global struggle.

The core team needs members who are willing to get shit done!

A. left Berlin in August to study in Portugal and L. works in Paris most days of the week. J. left the group right after the protest and so did I. Again 4 of 6 people dropped out. Now D. is the only Black person left in the core team…​

It is what it is. After all the trying, the disappointment, the losses and burnouts I lost my future vision. No longer can I believe that collectivism is possible in a society that raised us based on ego, capital value and consumerism.

Currently, I think there are two types of people: Those who give their everything: time, energy, sleep, care, thoughts, ideas, skills – and those who don’t. The first type of people are „caregivers“ and mostly they identify as or been socialized as female. I don’t want to talk about the other group right now, but especially if you do not identify as a caregiver listen!

We could just all carry a little bit instead of putting it all on just a few shoulders but for some reason that is exactly the theory that this community (same as this whole fucking society) is unable to turn into actions.

My aim was always to use my privileges to build structures that are useful for people who don’t have the same access to shit as I do. But especially this year, I realized that this is not what we are doing at BLMB. Instead, we curated an interesting cultural and intellectual monthlong program and organized a beautiful day with amazing keynotes and live music.

Please don’t get me wrong, self-organized community spaces like that are very important to heal, connect and to empower each other but several points were missing:

1. Materialist Criticism: There is no racism without capitalism

3. Knowledge Of Self: ask yourself first, who am I, and what do I fight for? Do I want to be integrated into this society or do I want a different society?

What does it mean to fight it „by any means necessary“? From my point of view, it is absolutely necessary – not only to get a seat on the table but to flip that fucking table upside down for all of us.

I take a step back now – to reflect and recharge to find out where to go from here. I‘m no longer part of the core team but I’m still with the cause of #BlackLivesMatter. Even though I know that I‘m not the only one who is leaving I have to and I need to remind myself every day that it is ok.

Maybe there will be no Black Lives Matter Berlin next year. But if that would be the case and there are actually not enough people who want to be part of a movement or form a community and fight together, then maybe Germany is not ready for such a movement right now.

„Without community, there is no liberation.“

Write to kontakt@blacklivesmatterberlin.de to join Mattermost and be informed of the next internal Orga Team meeting.